MUMBAI: India’s slowing economy could cause gross bad loans in the financial system to rise again after the first annual decrease in eight years, even as a seventh of non-bank lenders faced the risk of failing capital adequacy tests if gross nonperforming assets (NPA) were to increase 3%, the central bank said Friday.

The slowdown could cause the gross non-performing ratio of local lenders to increase to 9.9% in September 2020 from 9.3% in September 2019, the Reserve Bank of India’s (RBI) Financial Stability Report showed.

“This is primarily due to change in macroeconomic scenario, marginal increase in slippages and the denominator effect of declining credit growth,” the RBI said in the report. Credit growth remained subdued at 8.7% until September 2019.

The bi-annual report said that banks saw stable asset quality in the first half to September, and 24 banks had gross NPA (GNPA) ratios below 5%. But four banks had GNPA ratios higher than 20% in September 2019. The share of large borrowers in Indian banks’ total loan portfolios stood at 51.8% as on September 30, and their share in gross NPA was 79.3%.

NPAs of Private, Foreign Banks
Stress tests on public sector banks showed that GNPA may rise to 13.5% by September 2020 from 12.7% in September 2019 in a severe stress scenario.

Private sector banks could see increase in gross NPAs to 5.4% from 3.9% during the same period and foreign banks from 2.9% to 4.2%. The central bank conducts stress tests to assess the resilience of the Indian banking system against macroeconomic shocks for credit risks. These tests included a baseline and two adverse (medium and severe) macroeconomic risk scenarios. 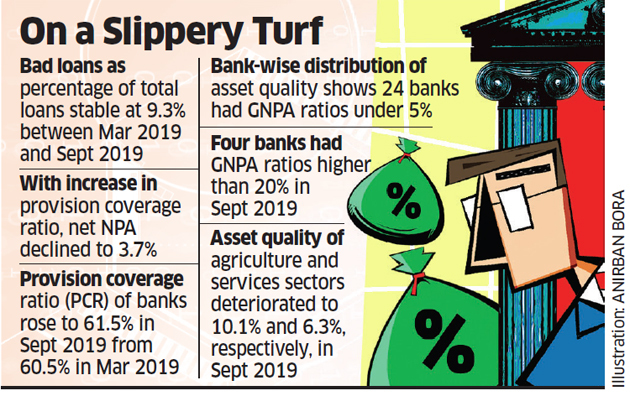 For banks with high bad loans, availability of growth capital, or Tier-I capital, appears to be limited.

On NBFCs, the report said that under a severe stress test scenario, 14.2% of the NBFCs will not be able to comply with the minimum regulatory capital norms if the gross NPA rises by 3%. The report showed that consumer credit portfolio of NBFCs and HFCs had relatively higher delinquency rates as compared to banks.

Delinquency in home loans and loans against property rose for NBFCs and HFCs, while it remained stable for banks.

NBFCs have seen stress in their asset quality during the first half of the fiscal. The gross NPA ratio of the NBFC sector increased from 6.1% as at end-March to 6.3% as at end-September.